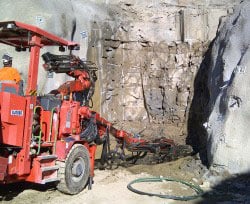 February 1, 2013
Mine Development, Mine Production, New South Wales, Whole of Mine

Approval was given to PYBAR early December to start the project, with immediate mobilisation of all major mining equipment and crew to commence early works mid-January.

By the end of January, early works were completed, surface infrastructure established and portal excavation had commenced. To ensure stringent quality control during this critical stage in development, portal works are being conducted on a day shift only basis. Portal development is currently eight metres into the portal, with works to continue to 30 metres. Once portal work is complete, the project will switch from day shift to a 24 hour operation for the remainder of the operation.

PYBAR has overcome the challenges of difficult ground conditions while establishing the portal, working closely with YTC Resources to ensure the portal infrastructure is safe and facilitates productive development to the ore body.

Operations Manager David Hunter says “We are very pleased with the progress and the mobilisation process. Within five weeks of approval we were on-site and mining. This was a great effort considering Christmas was in the middle of that five weeks”.