PYBAR has been on site at the Mount Isa copper mine for more than eight years, cementing a strong and trusted relationship with our client Glencore (previously Xstrata). We have valued the opportunity to deliver excellent results together.

Our exceptional safety record has supported a strong development performance. Some highlights include:

As from 1 October, Mount Isa will operate with a reduced work force. PYBAR commenced its development operation at Mount Isa in 2010 initially with a twin boom jumbo, a single boom jumbo, a service crew and a charge crew with three diamond drill operators on labour hire to Xstrata. Since then, the mine ownership has changed but we have continued to operate at the site.

Today, having reduced our workforce from 61 to 15 people, we remain a part of the team delivering the same reliable and safe service. Congratulations to the entire team at Mount Isa for some great results and innovations! 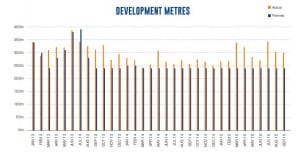