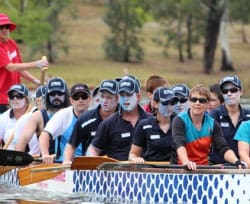 Dragon boat racing is a long standing Chinese tradition that has developed into a fast and furious water sport around the world. The dragon boats are generally rigged with decorative Chinese dragon heads and tails and the teams – usually 12 people – sit within the boat to paddle for power.

The competition had 16 teams completing the 250m course on Lake Canobolas (Orange NSW) – each team competing in four heats, racing for charity.

Despite a less-than-ideal training program (ie none) and a collision in the second heat, the PYBAR team progressed to the grand final. The result was a close second (by only 25 seconds) to the ‘Cargo Shearers’ and this placing generated a donation of over $1000 to PYBAR’s chosen charity – Anson Street School in Orange.

Anson Street School caters for students with special needs aged 4 – 18 years and works in partnership with parents and caregivers to develop individual education programs for each student.

It was a great day out on Lake Canobolas and the PYBAR team is keen to enter again next year – to win!