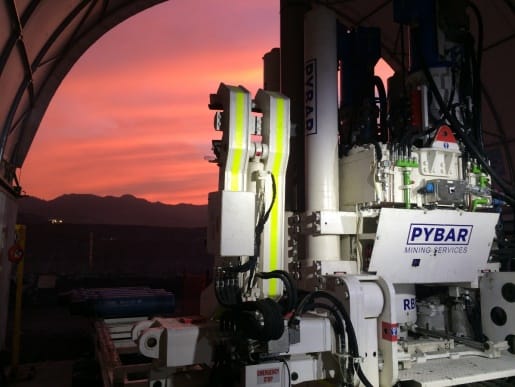 2017 has been an exciting year so far for PYBAR’s Raise Bore Division as it further increases our raise boring service capabilities.

With the arrival of the new SBM450, Atlas Copco 61RH and the SBM800, we now have seven raise bore rigs in our fleet.

The growth of the fleet’s capability has been driven by the performance of our experienced raise drill crews and existing rigs which continue to produce holes at a consistent rate.

After a successful project at Deep South, the Atlas Copco Easer L returns to our workshop for a major scheduled service before mobilising to its next project. There is much interest in this rig due to its flexibility and productivity benefits.

The Redbore 40 raise bore has been at Didipio in the Philippines and has so far completed five escape way rises (221m) and six service holes (240m) with ongoing work for 2017.

The Redbore 50 has just completed a project at Thalanga mine and has undergone a 1,000 hour service which included crack testing all the drill cons on site. The rig will be mobilised to its next project in September 2017 with ongoing work in Queensland.

The SBM 450 raise bore rig has undergone a scheduled service ahead of its next mobilisation.

The Atlas Copco 61RH is currently based at our workshop and will undergo commissioning and testing before being mobilised to the next project.

The SBM 800 rig has just completed two projects, a 3.5m diameter shaft at Thalanga mine and a 4.5m shaft at King Vol mine. The rig has been mobilised to the next project to drill a 361m x 2.4m diameter ventilation shaft.

This large raise bore rig is proving itself in very hard rock formations ranging from 290mpa to 320mpa. The RBR 600-VF features a PLC control system, allowing unprecedented control during the reaming process. To date it has completed six ventilation shafts at Didipio.