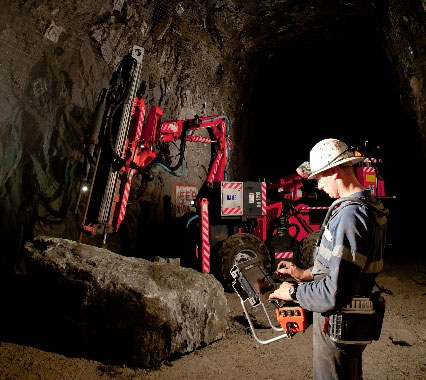 January 3, 2006
Jumbo, Mine Development, Mine Production, Whole of Mine


New equipment trial by PYBAR Mining Services reduces the interruption of oversized rocks in underground mine development. Oversized rocks- a frustrating interruption during underground mine development can now be managed in a safe, effective way that minimises production downtime thanks to a trial conducted by PYBAR at the Straits Resources Tritton Copper Mine with the Sandvik DB120

The Sandvik DB120 is a remote-controlled underground hydraulic drill rig for secondary rock breaking and PYBAR is the first mining company worldwide to deploy this equipment in commercial operation.

Traditionally the main way to remove oversized boulders is to use explosives, however this is not suitable in all environments and the risk of ore dust ignition means explosions can often only be done between shifts when there are no people in the mine.

‘We knew there had to be a way of minimizing downtime in this environment’ says PYBAR Operations Manager David Hunter, ‘so we researched and discussed with our suppliers some potential solutions to this issue – this piece of equipment provided a return on investment in record time’.

PYBAR has deployed the DB120 at the Straits Resources Tritton Copper Mine where PYBAR is contracted to do the underground mining. Brad Watson, PYBAR’s Project Manager at Tritton Mine and his production crew often have to break oversize rocks that block the draw points or are too big for the loaders.

‘If the rock came down early we used to have to wait the whole shift before we were able to fire it and get back to drawing the ore,’ says Watson. ‘now we can immediately send the DB120 into the open stope to break down the oversize rocks and remove in more manageable sizes, then we can continue to bog the stope out by remote.”

‘With the new equipment, it only takes a couple of hours after a boulder has been identified to be back in production again.’

PYBAR’s solution has significantly contributed to the record production levels delivered to the Tritton Mine.