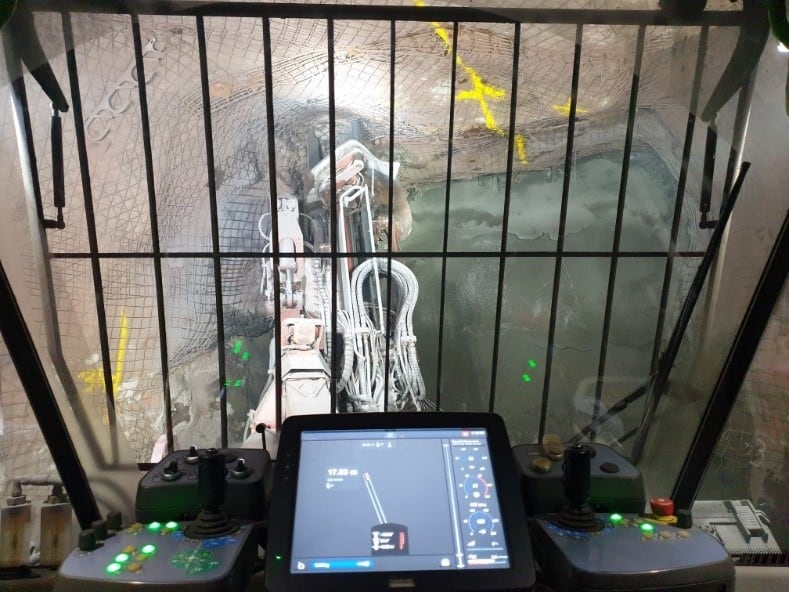 
The introduction of PYBAR’s new Sandvik DL432i longhole drill in October 2020 has led to month on month improvements in drilling productivity at the Black Rock project.

Versatile and compact, the Sandvik DL432i is a fully mechanised electro-hydraulic top hammer longhole drill, designed for large-scale mining. The Sandvik iSOLO drilling control system allows the client to provide electronic drill plans on a USB which is plugged straight into the drill. The operator then lines the drill up on the survey markings and selects the required drill design, with the remainder of the drilling taken care of by the iSOLO software.

Since arriving on site, a specialised pump has been installed on the DL432i, allowing AMC (a subsidiary of IMDEX) to add Bore Hole StabiliserTM to the water circuit while drilling to improve hole integrity in the soft ground conditions. This technology combined with Sandvik’s iSOLO drilling control software has been key to PYBAR’s production success at Black Rock to date.

The ground conditions at Black Rock have put Sandvik’s iSOLO drilling control system to the test, and the technology has proven itself with flying colours. After several months of onsite refinement of the automated drilling system, the drill can now operate with minimal operator input. This has led to month on month increases in production drilling rates with a record month in March, closely matched in April. This in turn has meant a significant increase in available production fronts resulting in increased tonnes and improved overall project performance.

Trials of automated drilling for complete firing patterns will begin shortly at Black Rock to enable drilling to take place during firing and shift change as well as free up the operator to assist with other tasks around the mine.

The transition to further automation has the potential to significantly maximise both productive drilling time and overall performance for the project.