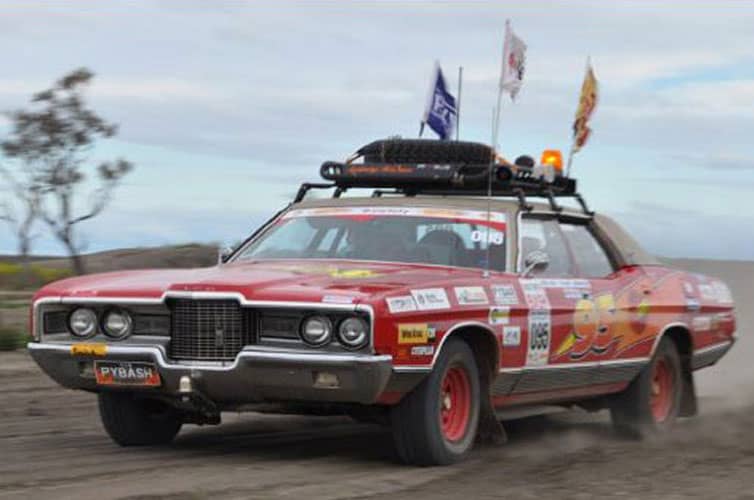 BASH raises $34K for the Variety Club of NSW


The PYBASH team have recently returned from the 2011 Variety Bash and were successful in raising over $34,000 for the charity thanks to some generous donations from suppliers and supporters

The Bash this year went from Baulkham Hills (Sydney) to Buccaneer Rocks (Broome, WA) and covered some interesting and challenging weather and road conditions along the way. Paul Rouse, Team Captain commented that this year was seen to be one of the toughest Bash’s for a few years with mechanical incidents and withdrawals experienced by some of the most seasoned and mature Bash entrants.

Lightning McQueen, Car 095, a 1971 Ford LTD, as entered by the PYBASH team was one of those that “did not make the distance”!! Lightning suffered a major “engine haemorrhage” just out of Tennant Creek and was towed into that centre for assessment. Despite using all of the chemi-weld in town, it was decided to let Lightning rest and a replacement was sought. Within a few hours the team were back on the road in a well-used Toyota Landcruiser Wagon with over 300,000km on the clock. While not within the age guidelines for a Bash car, it was allowed to enter for the remainder of the Bash and it went well under the remaining harsh conditions. It continued to Broome without any issues!

The “original” Lightning has been transported back to Orange and is currently under repair so that it can be ready for future Bash events, both locally and with Variety, the Children’s Charity!

The PYBASH team consisted of three PYBAR staff, two JT Mining and Electrical staff and two guests who contributed to the sponsorship and support for Variety.

The Bash is not a race or rally and Variety control the event to ensure that speed is not important. All entrants have an enjoyable time and support each other in regard to mechanical issues and provisions as required. However, we do it “for the Kids” is a favourite comment!

The Variety Bash was originated by well-known businessman, explorer and philanthropist, Dick Smith, in June 1985, when he organised a “tour in the bush, from Bourke, NSW to Burketown, in North Queensland. Since that time the B to B theme has continued!

Paul and the team are proud of the $34,000 raised to support such a worthwhile charity as Variety and are looking forward to supporting Variety and other local charities in the future.